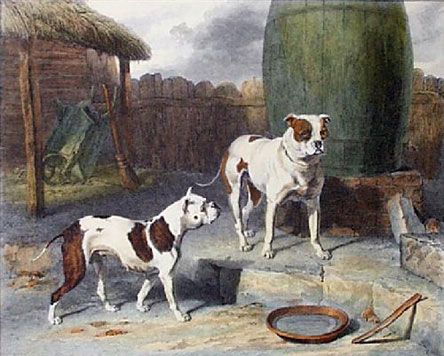 To correctly give the origin and history of the American Staffordshire Terrier, it is necessary to comment briefly on two other dogs, namely the Bulldog and the terrier.

Until the early part of the 19th century; the Bulldog was bred with great care in England for the purpose of baiting bulls. The Bulldog of that day was vastly different from our present-day "sourmug." Pictures from as late as 1870 represent the Bulldog as agile and as standing straight on his legs-his front legs in particular. In some cases he was even possessed of a muzzle, and long rat tails were not uncommon. The Bulldog of that day, with the exception of the head, looked more like the present-day American Staffordshire Terrier than like the present-day Bulldog.


Some writers contend it was the white English Terrier, or the Black-and-Tan Terrier, that was used as a cross with the Bulldog to perfect the Staffordshire Terrier. It seems easier to believe that any game terrier, such as the Fox Terrier of the early 1800s, was used in this cross, since some of the foremost authorities on dogs of that time state that the Black-and-Tan and the white English Terrier were none too game, but these same authorities go on to stress the gameness of the Fox Terrier. It is reasonable to believe that breeders who were attempting to perfect a dog that would combine the spirit and agility of the terrier with the courage and tenacity of the Bulldog, would not use a terrier that was not game. In analyzing the three above-mentioned terriers at that time, we find that there was not a great deal of difference in body conformation, the greatest differences being in color, aggressiveness, and spirit. 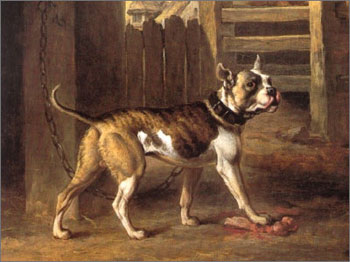 In any event, it was the cross between the Bulldog and the terrier that resulted in the Staffordshire Terrier, which was originally called the Bull-and-Terrier Dog, Half and Half, and at times Pit Dog or Pit Builterrier. Later, it assumed the name in England of Staffordshire Bull Terrier.


These dogs began to find their way into America as early as 1870, where they became known as Pit Dog, Pit Bull Terrier, later American Bull Terrier, and still later as Yankee Terrier.


In 1936, they were accepted for registration in the AKC Stud Book as Staffordshire Terriers. The name of the breed was revised effective January 1, 1972 to American Staffordshire Terrier. Breeders in this country had developed a type which is heavier in weight than the Staffordshire Bull Terrier of England and the name change was to distinguish them as separate breeds.


The American Staffordshire Terrier's standard allows a variance in weight, but it should be in proportion to size. The dog's chief requisites should be strength unusual for his size, soundness, balance, a strong powerful head, a well-muscled body, and courage that is proverbial. 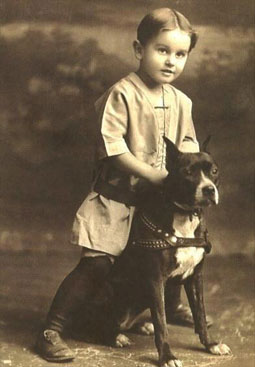 To clarify the confusion that may exist, even in the minds of dog fanciers, as to the difference between the American Staffordshire Terrier and the Bull Terrier, a comment on the latter may be helpful. The Bull Terrier was introduced by James Hinks of Birmingham, who had been experimenting for several years with the old bull-and-terrier dog, now known as Staffordshire. It is generally conceded that he used the Staffordshire, crossed with the white English Terrier, and some writers contend that a dash of Pointer and Dalmatian blood was also used to help perfect the all-white Bull Terrier. 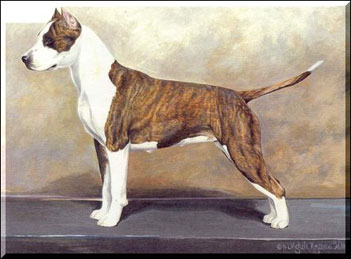 In mentioning the gameness of the Staffordshire, it is not the intention to tag him as a fighting machine, or to praise this characteristic. These points are discussed because they are necessary in giving the correct origin and history of the breed. The good qualities of the dogs are many, and it would be difficult for anyone to overstress them.